The NEAR Steering Board member, Lars Nyberg, was interviewed on Swedish science radio (“Vetenskapsradion”) about his newly published study in PNAS, which found that higher education does not influence brain aging.

The study includes more than 2000 individuals from several European countries from the Lifebrain consortium. The study found that highly educated individuals have slightly larger brain volumes than less educated persons, but their brains shrink at the same rate throughout life. 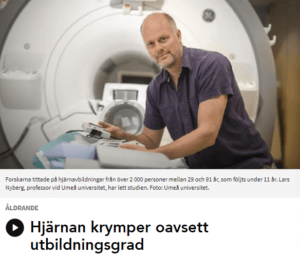 Read the article in PNAS

Listen to the interview (in Swedish)

More in the media

The NEAR Scientific Advisory Board member, Miia Kivipelto, participated in TV4 Nyhetsmorgon where she talked about her new book release on how to decrease the risk for Alzheimer’s Disease (AD), which she has written together with Professor Mai-Lis Hellénius.   Watch the program here

Karl Michaëlsson – In most cases vitamin D supplements are unnecessary

The NEAR Steering Board member, Karl Michaëlsson, was interviewed in the daily newspaper SVT about vitamin D supplements. Prescriptions of vitamin D has increased by almost a thousand percent in recent years. However, Karl explains that supplements are unnecessary if you don’t have any deficiencies. Read the article in SVT

Ingmar Skoog – “An encroachment with isolation and a restraining order”

The NEAR Steering Board member, Ingmar Skoog, participated in SVT to discuss the increasingly frequent spread of COVID-19 infections in nursing homes. The development raises some concerns, but Senior Professor Ingmar Skoog still does not want to go back to stricter restrictions: “It’s an encroachment with isolation and restraining order”.   Photo: SVT Watch the […]