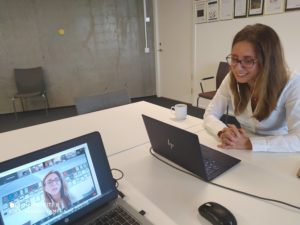 NEAR at the Nordic Congress of Gerontology

Photo: Maja Rudolphson For three days 8-10 June, NEAR attended the 26th edition of Nordic Congress of Gerontology which this year took place in Odense in Denmark. The theme of this year’s congress was CHANGE & CONTINUITY and NEAR participated as one of the sponsors and had an exhibition booth where we presented NEAR and […]

NEAR consist of 15 databases and four of those belong to Swedish National Study on Aging and Care (SNAC). This year SNAC celebrating 20 year, and recently they met at a Jubileum retreat in Stockholm archepelago. Researchers and the data collection staff working with the SNAC met at Djurönäset, Stockholm, during a two-days retreat on […]

NEAR is looking for a Data Scientist

NEAR is looking for a highly capable system developer with a central role in the development of the national e-infrastructure for aging research (NEAR). Your daily work will include a mix of system development, maintenance of existing systems, system communication, data management (transformation, uploading, extraction) and statistical strategies for harmonization. The system developer will be […]