NEAR symposium at GSA in Indianapolis, USA 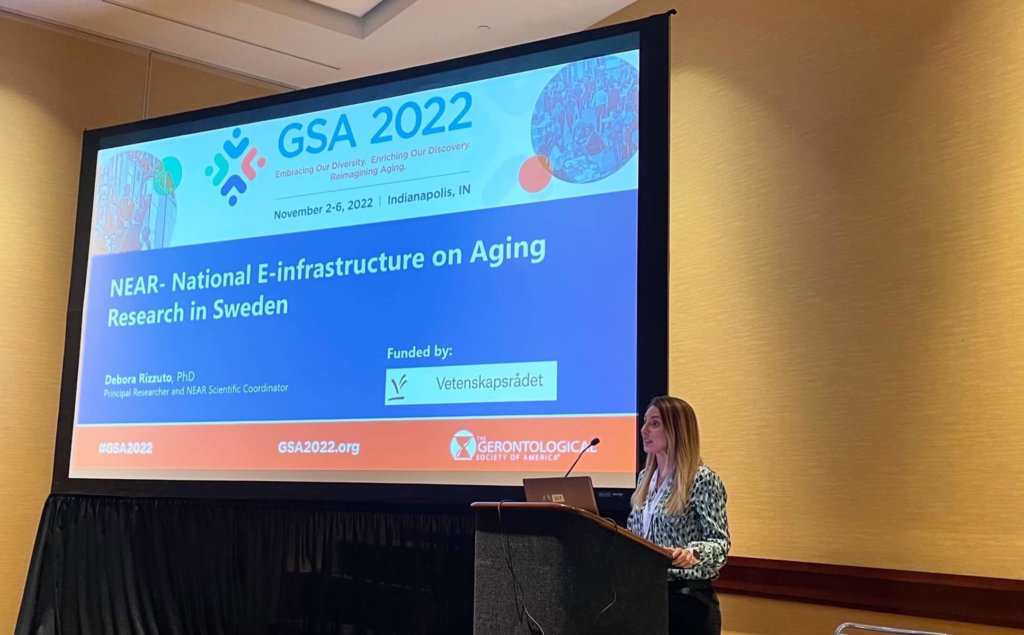 In the beginning of November, NEAR was on site in Indianapolis when the annual meeting of the Gerontological Society of America (GSA) took place. GSA is the oldest and largest interdisciplinary organization devoted to research, education, and practice in the field of aging.

Several NEAR representatives were present and held a symposium to present the infrastructure as well as research results from ongoing NEAR projects. NEAR’s Scientific Coordinator Debora Rizzuto chaired the session together with Scott Hofer from Oregon Health & Science University.

– GSA is an important arena for international cooperation and not least an important place to natworking. We are therefore very happy that we were given the opportunity to have a symposium to both present NEAR and exemplify results that the infrastructure can contribute to, says Debora Rizzuto.

Three ongoing projects were presented, The new aging: how different aspect of ageing has changed over half century. The H70 study within NEAR by Ingmar Skoog, Gothenburg University, Functional age trajectories and drug interactions by Debora Finkel, Jönköping University, and Long-term prediction of dementia using machine learning algorithms by Ana Louiz from Blekinge Technical University.

Welcome to NEAR Maria Wahlberg

From the 1st of November we are happy to welcome Maria Wahlberg as a Database Coordinator in the NEAR team. Maria has a Master of Science degree in Statistics from Linköpings Universtitet. She has worked as Data manager for the Kungsholmen Project since 1997 when she began her carrier at Karolinska Institutet. Since the start […]

Collaboration – focus during this years NEAR workshop

On 18-19 October, 60 persons from 12 different universities gathered at Karolinska Institutet in Stockholm for NEAR’s annual workshop. Focus for this year’s workshop was collaboration, with purpose to create more opportunities to work together, learn more about other infrastructures work, and what we can learn from each other. The workshop was chaired by Debora […]

NEAR was represented at the Collaboration in Science

During 6th -7th October, NEAR attended the Collaboration in Science conference in Flemmingsberg. The conference is an initiative of Karolinska Institutet and Karolinska University Hospital Huddinge and aims to strengthen and promote translational research collaborations between basic science and clinical research. During the conference, there were both opportunities to take part in inspiring speakers and […]